Which Way for the Soviet Union?

There have, of course, been conflicting versions of last summer's events in the USSR, but on essentials the reputable experts seem pretty well agreed. A long-smoldering struggle between "Stalinists" and "reformers" was intensified and embittered by the explosions in Poland and Hungary. As in all such cases, most of the leading personalities were sooner or later drawn in on one side or the other, often more on the basis of personal hopes and fears than on principle. The Stalinist coalition was led by Molotov and Kaganovich who were later joined by Malenkov and Shepilov, while on the other side the outstanding personality was Khrushchev. The struggle seems to have sec-sawed back and forth during the winter and spring. Finally, in June, the Stalinists, judging that the time to strike had come, called a special meeting of the party Presidium, mobilized a majority of votes, and moved to depose Khrushchev. The latter refused to yield and demanded that the dispute be submitted to the Central Committee, made up for the most part of younger provincial party functionaries. At this stage, it would appear, Marshal Zhukov threw his full weight behind Khrushchev, which was enough to ensure an overwhelming victory for the reforming faction. 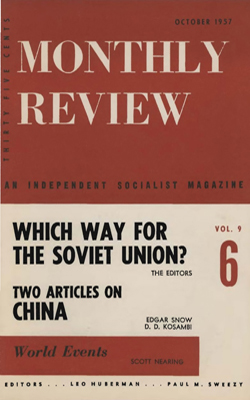