Under the above title, the following letter was published in the Washington Post and Times Herald of April 1, 1955, and it was also published (under the title "Classroom Freedom") in the Christian Science Monitor of April 7, 1955. We are, of course, deeply gratified by this forthright defense of academic freedom by ten of the country's most distinguished scholars and teachers. We urge MR readers in colleges and universities to publicize this letter as widely as possible and to stimulate others to a similar active defense of academic and intellectual freedom in their own communities. The signers of the letter are professors at Columbia and Harvard as follows: Columbia—John L. Childs, education; Henry S. Commager, American history; Walter Gellhorn, law; Robert K. Merton, sociology; Ernest J. Simmons, Slavic languages. Harvard—Paul H. Buck, American history (formerly Provost of the University); Seymour E. Harris, economics; Mark DeWolfe Howe, law; Edward S. Mason, economics; Perry G. E. Miller, American history and literature. -THE EDITORS 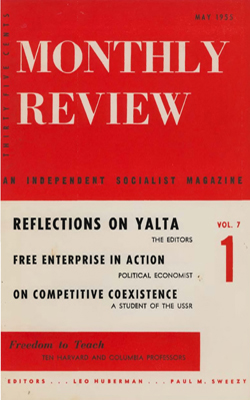